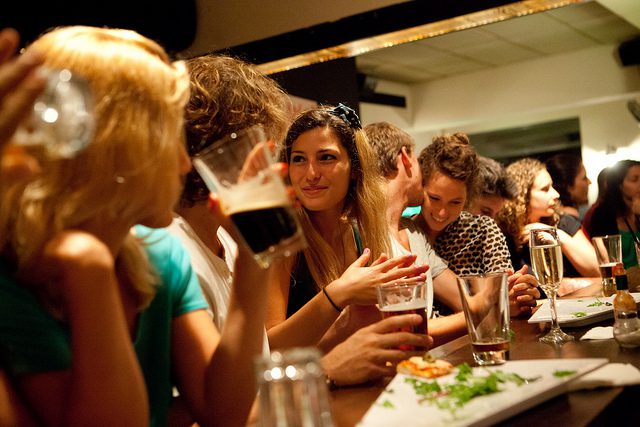 “So how many girls have you slept with in the last month?”

She tried to make it sound like a casual question. But it was obvious she had been building up to it for the last half hour.

I had to laugh.

Not just because of the out-and-out boldness of facing such a personal question when we were hardly serious, but because she looked at me so earnestly, as if I really did have something to hide.

The funny thing was though, I didn’t.

I had so little to hide it was kind of embarrassing.

My laugh sounded guilty though. Nervous maybe. And just then I remembered how annoying women find it when a guy responds to a serious question by laughing, so I quickly stopped.

“Slept with?” I said, raising my eyebrows. “I haven’t even met any girls in the past month.”

She nodded her head slowly, half-satisfied but unconvinced. She had that ‘don’t-give-me-the-usual-bullshit’ look a woman can get when she is absolutely certain that she and she alone is clued into what all men are like.

If only she were more clued in, she’d know the truth often turns out to be depressingly more sober than the fictions in our heads.

How Often Are Single Men Having Sex?

I’m always fascinated by the sex lives women imagine guys to have.

It seems to be one endless frat-boy fantasy, in which men are regularly approached by perky nymphomaniac cheerleaders, or lured from the bar by the buxom temptress in the red dress, who simply has to beckon with a finger to lead guys straight into a taxi to her bedroom.

Yea, right. In his dreams.

Most men are not smooth criminals. We are not Leonardo DiCaprio on a private beach with our next Victoria’s Secret model. Most of us are very grateful if we get a nice girl’s phone number once a week, let alone get asked to go to bed with a complete stranger.

How does this misconception arise, then, that guys are getting lucky more than they really are?

Partly, the problem comes down to men themselves: there are huge bragging rights in acting like a guy who has had more sexual partners than he can count on his fingers and toes, and guys often think it makes them sound more desirable if they’ve had a lot of sexual experience. So it pays for men to spread the rumour that they have an abundance of choice at every moment.

There is also a possible cultural explanation: Take one too many viewings of reality shows like Jersey Shore, coupled with the general rule that nearly every popular TV series must feature its alpha male characters having an affair or three, just to show how alpha they really are (See Mad Men, The Sopranos, The Wire, True Detective, House of Cards, and many, many more), and it becomes easy to believe that guys have no trouble whatsoever playing around whenever the mood suits them.

A final explanation, sadly, could be that women make assumptions that other females are easier to bed than they are.

I can’t speak for this assumption, and you may tell me otherwise, but it’s possible some women, despite knowing that they themselves have high standards, assume that there are scores of women out there who are much looser about having sex, and will be willing to sleep with a guy in a single evening, thus implying that guys have sex far more easily than they really do.

Any of these reasons are plausible. But the result is clear: women tend to assume men have far more sexual opportunities than they do in reality.

Statistically, only a small handful of players/ studs/ man-whores (choose your label) are actually doing the majority of the bed-hopping. Your average guy, however, is just feeling lucky if he managed to summon up the courage to talk to a pretty girl for twenty minutes on Friday night.

I would also wager that most women would also be astonished if they only knew how many good guys in fact refuse to pursue the occasional opportunity for casual sex because they don’t have any real feelings for the person offering it. This doesn’t go for all guys of course – I wouldn’t lie to you and pretend that all men are misunderstood sweet romantics inside.

But the presumption is false that most men fit into the ‘play around’ category, and that those who don’t are in the minority. We have to be constantly vigilant about making these false assumptions about an entire gender just because of some stereotypes in mainstream culture.

Take a recent Men’s Sex Survey of 10,000 guys by InsideHook (you can see the Buzzfeed highlights here), in which a considerable 48% of single men admitted to only having sex once a month or less (and you can guarantee most them were in the “or less” category). Another 23% of single men admitted to having sex once a week or less (again, you can bet most fall into the “or less” group).

And even these results are probably overestimating men’s sex lives, since men are liable to exaggerate their sexual numbers – for male pride is strong enough to overcome even the most anonymous of surveys.

Why These Assumptions Can be Dangerous For Your Dating Life

So how does knowing about the paucity of sex in the average bachelor’s life help you?

I believe it shatters an illusion into which modern society has brainwashed us. The illusion that everyone else is partying, having random sexual encounters, and generally living a movie star sex life when we’re not around.

Social media likes to feed this fantasy, by showing the highlight reels of our friends at what appear to be an endless stream of cocktail fuelled balls and wild nights out – all of which make us feel more depressed about the contrastingly sedate reality of our own daily existence (which is really everyone’s daily existing when they aren’t busy presenting a false image of themselves).

Moreover, when these cultural-gender stereotypes are in our mind in the early stages of dating, they can easily completely throw off our confidence and make us feel suspicion, envy or fill us with anxiety about the sexual side of things when our focus should only be on showing the best sides of our personality.

Perhaps the advice here is to be careful of buying into society’s portrayal of men and women – it can lead both sexes to self-destructive behaviour around each other.

Or maybe it’s that you can afford to relax and scope out a guy more than you think in the early stages, given that it’s a myth that guys will instantly go and look elsewhere if they don’t immediately have what they want (incidentally, it should never feel like you have to just give a guy whatever he wants in order to keep him in the early stages).

Or maybe it’s just to realise that there is much more variation among men than we imagine, and that gender stereotypes about men’s desire and ability to acquire easy sex cause us to overlook the range of guys out there who have very different ideas about what they want when they go out to meet women.

If nothing else, maybe just this: the next time you see a single guy strike out at the bar, go and give him a ‘way to go champ’ pat on the back and some words of encouragement. Because he’s clearly not scoring as much as he’d like everyone to think.