I’ve been trying out one of those teeth-whitening courses for the last month, one of the unfortunate side effects of which is that I have a “no-go list” of food and drink that aren’t allowed to pass my lips during this period.

By far the hardest of these has been ridding myself of coffee and tea.

Although I’m not one of those people who find themselves unable to function in the morning without their daily caffeine intake, I am preposterously dependent on hot drinks for a warm pick-me-up-feel-good sort of pleasure.

It’s not a necessity. I just really like coffee and tea.

Chugging from a cappuccino or clutching a freshly brewed mug of tea is one of my small pleasures that gives the day colour and shape. I drink several coffees a day, a tea before breakfast, and often make a trip out to some local shop to get a latte just to break up long bouts of working at my desk all day.

Yet, when you’re actually forced to quit something you’ve come to rely on, you immediately notice just how much a part of your life it is. 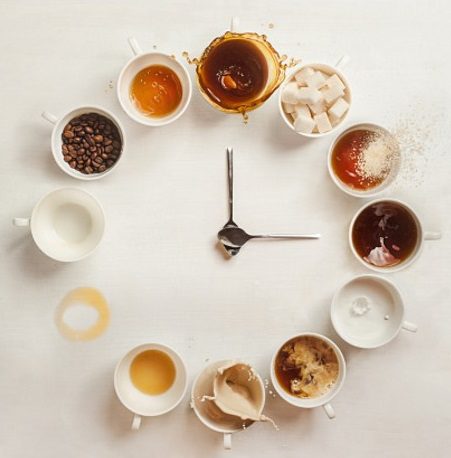 Having a month of enforced abstinence made me quickly see that coffee and tea have served many roles in my working day: as a stimulant, a mood improver, a form of procrastination, a method for dealing with frustration.

Stuck on a paragraph? Go turn on the kettle. Worried about an email? Head out to buy a coffee to take my mind off it . Can’t be bothered to get start writing? Maybe one of those chai-tea-latte things will spur my motivation.

I suppose this vice is fairly benign as far as addictions go.

It could be worse. I could be the kind of person who slams down a beer or a glass of whisky whenever they feel the onset of stress. And yet, this Mad Men-esque fantasy has been quickly exorcised out of me after one or two afternoon experiments that left me with nothing but a headache and a pile of unfinished work that I was too sluggish to concentrate on. Caffeine remains the only drug I can consume in high doses and still remain in the normal world.

Nevertheless, being entirely without my old friends the bean and the bag (coffee and tea that is, come now) has caused me to feel some of the clarity of the former dependent, like coming out of a particularly obsessive relationship and only afterwards realizing all the unhealthy elements that you had come to use as a crutch.

Every time I’ve come to a point at work in the last couple of weeks when I would usually stop, become stuck, and then head to brew a quick cup of PG Tips (English tea brand), I’ve noticed that now something else happens. I just sit quietly. I pause. I think. I maybe get a quick glass of water then return to my desk. But more often than not I just return back to the problem. Turns out I never really needed caffeine or a hot fragrant liquid to solve these mental blocks.

It just needed my attention. My willingness to concentrate. My mindful attention.

It is said that the Stoic philosophers, as a general practice, would deny themselves certain luxuries once a month so that they would be reminded of all the worldly luxuries they didn’t need. Some Stoics would sleep with the dog on the cold floor to show they didn’t require a bed. Others would eat simple meals of bread and water to wean themselves off luxury foods. My own form of this self-discipline has become replacing my favourite healing brews of tea and coffee with a bland cup of hot water on the occasions when I can stomach it.

Although my modest experiment with tea and coffee was basically been forced upon me, once I was over the initial headaches, twitching, and afternoon sluggishness, I found myself genuinely grateful for the insight it’s given me. All these years I thought I was drug-free, but it turned out I had my own great dependence on something that I knew could always give me a buzz of pleasure.

Without having the ability to jump to my go-to distraction of coffee and tea, I’ve learnt more how to be better at just remaining focused. I also sleep better (clearly I was knocking back the espresso way too late). I’ve even saved a surprising amount of money thanks to not paying for over-priced coffees every day.

I could tell you that all this means I’ve had some kind of Damascene–conversion, that I’m now in the group of the caffeine-free and will never touch a drop again.

But that would be a lie.

My name is Stephen Hussey, and I am an addict.

But maybe for my sleep’s sake I could do with closing the caffeine bar before 3pm in future.

What’s one vice you would struggle to give up for a month?