Sometimes a guy is being nice to you, but you’re still left wondering, “Does he like me?” or is this going to be a friendly-buddy thing.

He’ll be talking and connecting with you on your common interests, but you’re not sure whether he’s attracted, and you don’t want to risk rejection if you’ve read the signs wrong.

It’s often the case that a nice guy will talk to you, but have no intention of making a move or getting your phone number.

So if you find yourself always struggling with how to tell if he likes you (in a “I-cant-wait-to-kiss-her” kind fo way), here are some easy ways to know if he’s serious or if he sees you as a friend. 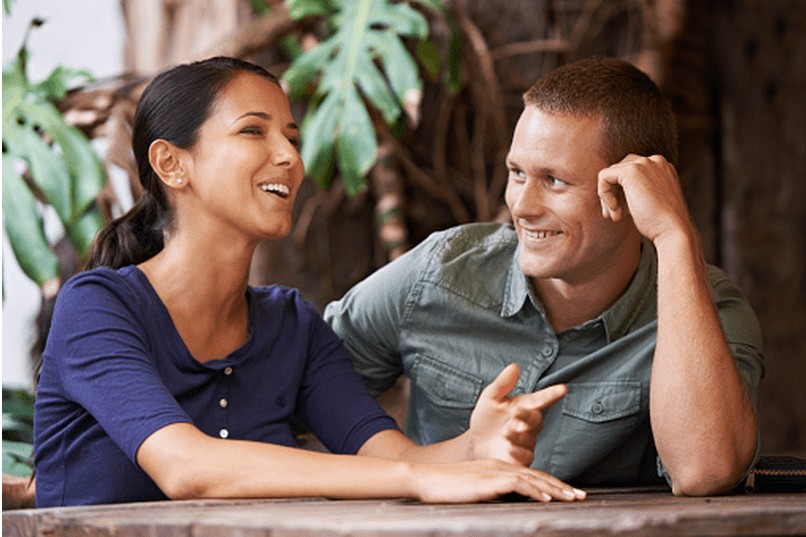 1. He Comes Looking for You

Maybe you’re talking at a social gathering, and you get split up for a ten minutes to chat with your respective friends.

If he likes you, he’s going to come looking for you at a certain point and try to re-engage your attention, either with a comment thrown in your direction or just by starting a conversation. If he does this, or seems to keep orbiting around you, it means that he unconsciously wants to be near you and feels attraction.

2. He’ll Dig for Questions to Keep the Conversation Going

One great test of whether a guy likes you is to observe whether he keeps making attempts to pick up the conversation even if it looks like it’s running dry.

He may stumble around as he finds ways to keep asking questions, but it’s a blatant signal that he’s trying to keep you interested in what he has to say.

No guy can resist trying to show off his best assets when he’s trying to impress a woman.

Hopefully he won’t do something really vulgar like talk about how much money he makes (though sadly some clueless men do just that!). More often, if he’s into you he’ll mention something he achieved recently that he’s proud of, or he’ll tell you about his career plans and how he’s currently living his dream job.

Yes, it might be a bit childish, but that’s kind of how guys are when they first realise they like a woman.

4. He Keeps Finding Your Eyes

But if he likes you, he’ll keep finding his eyes drawn to yours and may even appear to be staring deeply into them whenever you’re talking.

What’s more, even if he’s in the other corner of the room and you haven’t even met yet, he’ll be irresistibly drawn to looking over in your direction multiple times. And believe me, you’ll notice him looking over.

(Pro Tip: guys aren’t subtle). If you keep spotting him doing this and can’t find a way to get into conversation, make sure you’re clued up and know how to get him to come and talk to you.

5. He Remembers What You Tell Him

Guys easily become fascinated with everything with you say when they feel that pull of attraction. They remember the tiniest details about where you live, your work, that holiday you’re planning that you told him about.

One of the simplest signs that he likes you is whether he remembers and brings up these little details in subsequent conversations, as it’s a crucial indicator that he’s storing away what you say to try and impress you.

Men are surprisingly attentive with the women whom they want to pursue.

6. He Apologizes if He Gets Interrupted

If his friends suddenly come and starts talking to him when you’re in conversation, he’ll quickly bat them away and start talking to you again, apologizing for breaking your conversation.

Basically, a man who is into you will act like he has all the time in the world to stay in your company.

When a guy likes you, you’ll be able to tell that he’s fighting to schedule catching up, calling, or going out time with you, even if he happens to be really busy that week.

A man who likes you will subconsciously start prioritizing time to see you, since he won’t want to risk you getting away and forgetting about him.

He’ll also make sure to arrange the next meeting with you and talk about things you could both do together, like seeing a certain movie or trying a particular food place.

8. He Asks About When he’s Going to See You Again

This usually happens after a first conversation, when a guy is already asking what you’re doing after the party, or whether you’ll be at some other upcoming social event.

It’s an obvious sign that he’s making sure he has a way of keeping in touch and guaranteeing another chance to be in your company.

Now you know the signs, you’ll never be left going home wondering what a guy’s intentions are again.

It won’t always be completely obvious from the moment you meet, but if you notice 3-4 of these signs in regular interactions you’ll know that he’s attracted and you can start to feel comfortable investing in him further.

By the way, one you’re further along the line in a relationship, you’ll definitely want to check out my article on how to tell if a guy is in love with you. Make sure you check it out!