It Doesn’t Matter Why He’s An Asshole – Why Are You Putting Up With It?

“I’ve been dating this guy for 6 months. He tells me loves me, but also tells his parents we’re not together, ignores me in front of his friends, and doesn’t want me to know where he lives. Why would he do that?”

I read some version of this question on a weekly basis on Matt’s Twitter account or GettheGuy Facebook page, or even in the comments of this blog.

I’ve always found myself puzzled at what exactly the questioner in these moments is trying to discover. On the one hand, they may be innocently searching for an answer to the question  “What’s going on in his head?”

Yet, I can’t help but want to respond: Does it really matter why he would treat you this badly? Isn’t the really important matter at hand why you should stand around for a second longer and put up with someone who is violating every standard of decent human behaviour? 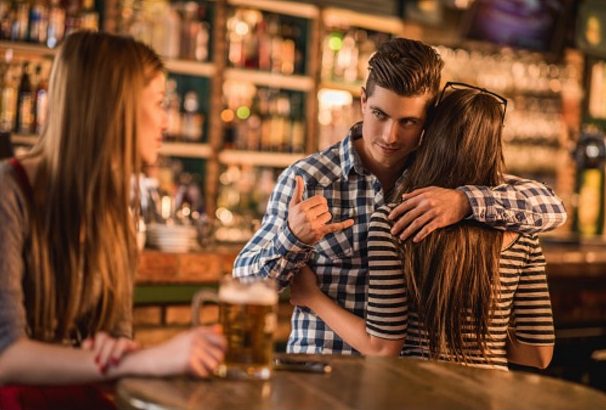 Some readers I suppose are asking precisely in order to get a reality check on whether this sort of thing is normal guy behaviour (it’s not), or they ask the question in order to hear an answer they already know in their heart to be true: this isn’t acceptable from a man or woman and you need to seriously reevaluate whether you would allow anyone else in your life to get away with this kind of behaviour if you didn’t also happen to be romantically attracted to them.

There’s a saying which I’ve recently grown fond of: Follow your heart but take your brain with you. Or to be more accurate, listen to your emotions but bring your reason with you.

If it smells like mistreatment, if it looks secretive and shady, or if you suspect you’re allowing a a guy to get away with behaviour you would never tolerate from even your most unreliable, flakey, not-really-but-sort-of-friend: listen to your rational brain and act on it.

We spend so long figuring out the enigma of other people’s behaviour and not nearly enough time on deciding our reaction to their behaviour.

We don’t have to understand every facet of the human mind. If I’m with a nasty, mean, duplicitous, manipulative person, I don’t need to understand all the reasons why someone would engage in that kind of behaviour. I’ll leave the analysis to the therapists. My job is just to decide why I would allow myself to give my time and energy to that kind of person for so long.

The reasons only matter if you’re already in a relationship who is already proven to be reasonable, respectful, and loving in other kinds of ways.

– You feel that your man, although kind and honest, is over-critical of your ideas sometimes.

– You feel that your man, although loving, gets jealous on occasion whenever you go out without him.

– You feel that he cares deeply for you, but he finds hard to express intimacy and you want him to be more open.

These are all worthy times to figure out the reasons behind this behaviour and attempt to address it with your guy. I’m all for understanding in a healthy relationship. In fact, Matt and I wrote our How To Talk To Men product precisely because we were obsessed with how to create better understanding between two people when those conflicts in loving partnerships arise.

But ultimately, when you’re dealing with a guy who has been lying or violated your standards from the beginning, you really don’t need to analyze the behaviour all that much. You can spend your life trying to understand shitty people, or choose to act so that you can make immediate room for the better relationship you deserve.

I know which one makes me happier.

32 Replies to “It Doesn’t Matter Why He’s An Asshole – Why Are You Putting Up With It?”