4 Subtle Ways To Flirt With A Guy On The Tube 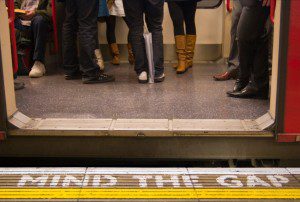 I was riding the tube to work today and I realised that there was a complete gap in the advice columns out there; they never really tell you how to flirt with a guy on the Underground.

Yet I’ve lost count of the amount of times my friends (girl and guy) come and tell me:

“You should have seen this guy/girl on the tube today. Unbelievable, and he/she was looking over!”

But the tragedy is, none of them do anything about it!

So I was thinking what the top tips are I would give to flirting in an environment like this:

1. Be aware of anything you can initiate conversation on

There’s a recurring theme of clients asking us: “I don’t know what to say?”

This is the number one issue so many people have, but the truth is it’s so easily solved! You don’t have to be clever about it all. Most guys actually welcome any form of conversation (especially with a woman).

For ideas, all you have to do is notice your surroundings a bit; Is he playing with an Iphone? If so, ask him if it’s worth buying one, or ask him what apps he would recommend. Or you might ask if you can borrow the newspaper sat next to him, or if he would recommend the book he’s reading.

I’ve said it before and I’ll say it again. Guys. Aren’t. Subtle.

If he’s looking over that’s an open invitation.

Also, guys aren’t as good at picking up on signals as women. So if you’re making eye contact with him, you need to make it much more obvious than you think for him to get the hint that you’re interested.

3. Positioning – Proximity is always the start

If he’s sitting down, you want to be sat next to him instead of on the seat opposite. It’s much better for flirting and making him feel closer to you.

4. Finally – Don’t stick on one topic

Try not to Let the conversation run flat.

It’s actually easier with strangers on the tube to keep the conversation moving forward; it sounds counter-intuitive but because we know we might not see the people we meet on a train again guys are often willing to be much more open with you if you start a conversation.

Ultimately if you want to flirt with a guy you don’t know my advice is to play and have fun.

If you feel bold then casually ask for his number at the end; or just use the opportunity to practice your flirting skills for when you meet a guy you really like.