6 Things Every Woman Should Know About Flirting With Men

One thing I’ve noticed about flirting is that everyone has a different image of it in their head.

Some people think of flirtation as very overtly sexual, like some movie cliché of bad innuendos and all-too-obvious attempts to make physical contact, whilst others think of flirting as little more than normal everyday conversation with a few extra jokes and smiles thrown in.

The truth lies somewhere in between. 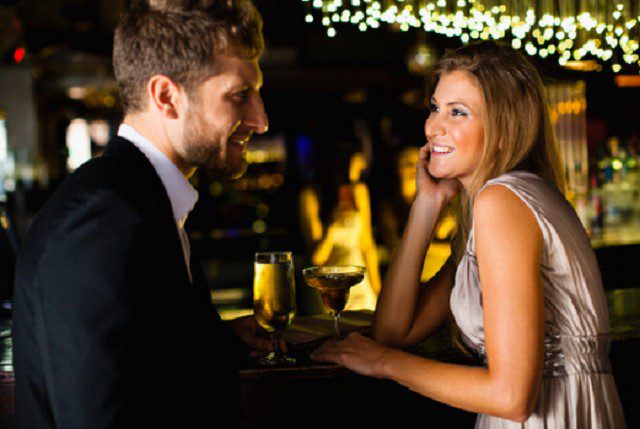 To help finesse this delicate balance between making flirting too sexual or too mundane, I’ve written 6 phrases that sum up exactly what constitutes creating that moment between two people who recognize each other as someone of romantic interest, rather than just as a friend.

You can’t flirt by keeping things at 10mph and chugging along with basic questions.

Him: What job do you do?

Her: I’m in online marketing.

Him: Oh cool, I have a friend who does that.

Him: Do you enjoy it?

Her: Yea it’s great because I can work wherever I want, but sometimes get bored of being at a laptop all day.

Him: Yea I can imagine.

We can see here that while things aren’t exactly going badly, they have no sign of moving anywhere interesting or even vaguely risky.

2. Flirting is about taking an extra step, even if it’s only 10% to begin with.

Her: I’m in online marketing.

Him: Oh cool, I have a friend who does that.

Him: Do you enjoy it?

Her: Yea it’s great because I can work wherever I want, but sometimes get bored of being at a laptop all day.

Him: That’s perfect, my job’s flexible too. Maybe we should just both leave this country go to a beach somewhere in Brazil so we can at least work in paradise every day.

Her: I LOVE the sound of that. We need to get a lilo so we can float in the sea and sip cocktails while we work.

Him: Ok, but I warn you now. If you splash my laptop, you’re dead.

That’s just one example – yes it’s silly, but it’s an example that allows you to talk about the idea of you both together in the future, and allows you to explore a ton of other avenues of interesting conversation, instead of just talking about what jobs you both do.

Flirting is the moment the dial in two people’s heads flicks from a neutral ‘friend’ feeling to a positive feeling of attraction.

As I’ve mentioned in a previous post, but so many people get bogged down in trying to be witty and clever, or trying to boast about their own accomplishments, but they forget that at its most basic flirting should be a way to show someone you actually like them, or at least, showing that you find something IMPRESSIVE about them.

If you like his career choice, his ambition, or the fact he cooks Thai food and writes poetry in his spare time, tell him!

This is why I stress the importance of being impressable. Even just saying, “that’s so cool”, or “I love that”, or “I’m impressed. It’s great when a guy is ambitious/musical/adventurous” has such a powerful effect in terms of putting you on a guy’s radar.

4. Flirting is…creating a shared moment by connecting over things that excite you both

Flirting is a moment of connection and bonding, laced with some tension just to make it more exciting.

This is why asking deeper questions is generally conducive to more of these flirtatious moments.

For example, asking open-ended WHY questions, like finding out why a guy works in a particular profession, or asking him about his exciting dreams for the future creates a space in which you both open up and allow yourself to be vulnerable by revealing something personal.

The more you encourage connection (mixed with the right elements of teasing and playfulness, as in the dialogue above), the more you have a shared moment of flirtation.

5. Flirting is…putting yourself on the line (in small doses)

For example, he does a silly laugh and you say, “that laugh is so cute”, or “has anyone ever told you you have great dimples?”. Or you might say “that bracelet is gorgeous. Guys who wear jewellery are hot.”

Flirting is about peppering your conversation with these tiny tweaks that create even a second of tension and excitement. If you say it with a smile and eye contact, it’s that brief second that creates a moment he’ll remember after going home.

Although being too coy can be annoying, flirting is also about holding something back for later.

That’s why the woman who is too sexual from the word go freaks men out. It’s like they are laying it all on the table and not giving him anything to pursue further.

Whilst I don’t think this should be a license for endless teasing, it does mean that at the beginning it’s always better to hint at things to come rather than be explicit.

For example, if you’re about to see a guy for a third date who you really like, and he texts you and joking about coming to your place afterwards, say something like, “Well, that depends entirely on how well dinner goes first…x ;)”.

That kind of coy teasing is better than something that heavily implies there’s definitely going to be something physical on the cards later.

Besides, keeping a guy guessing never hurt anyone.

Want to learn 59 more REALLY simple flirting techniques to get in a guy’s head and make him crazy for you?