How And Why You Need To Be Comfortable With Sexual Tension

Do you tend to giggle nervously whenever a guy pays you a physical compliment?

Do you immediately defuse the situation as soon as the guy you’re dating communicates his lust for you?

Do you flinch from giving a cheeky wink, playfully poking your tongue out, or a teasing touch?

If your answer to any of these is yes, it might be because you find sexual tension uncomfortable.

This typically happens with women who are either romantically inexperienced, or who are not used to embracing their feminine desires. 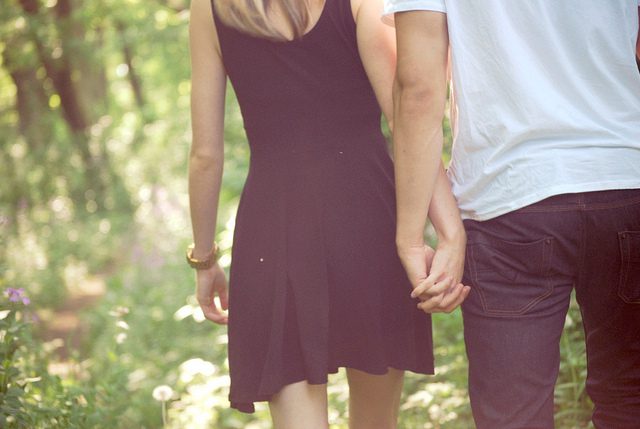 I’m not saying you have to be a seductress. Sometimes it’s even cute to be coy. Not every women has to drip with sensuality and wiggle her hips in a way that turns men’s brains to mush.

But being comfortable with sexual tension is an important part of attraction. It’s what creates the glow between two people that separates a friendship from a romantic relationship.

In the Get the Guy book, Matt talks about how some women fall into the Friend Trap with guys, which happens when you have the following formula:

Being able to create and enjoy sexual tension is a quick indicator of a few major qualities:

(2) It makes your interactions charged with excitement

(3) It makes him see you as a woman, rather than a girl (i.e. it imbues you with femininity)

Every guy sees himself being with a woman who can seduce, who can use feminine charm, who knows how to turn him on. And that means being comfortable with your sexuality.

Sexual tension doesn’t have to be direct. It’s communicated in tiny gestures, phrases, and body language.

Here’s a few simple ways to do it:

Just making a guy aware of your skin by touching hands, or playfully squeezing his arm, is enough to make him feel a tingle of excitement and notice your femininity.

If he’s a guy you know well, hug him when you say hello so that he can come in close. Maybe he’ll smell your shampoo. Or lightly slip his hands around your waist. That’s all good news (assuming you want him to that is).

In the wake of Fifty Shades Of Grey, I fear lip biting has become too comic a gesture to be taken seriously as flirting now. I’m sure there’s already an army of would-be Anastasia Steele’s chewing their mouths off in the hope of attracting kinky billionaires.

Doesn’t stop it being cute though. Especially if it’s done over a smile. Just don’t overdo it.

If he’s wearing a V-neck top, tell him he has a manly chest. If he says something masculine, say “you’re such a guy” and roll your eyes in a cute way.

Ask questions that are original and playful.

“Do you realise how lucky you are to have someone cool like me hanging out with you? You better appreciate it while it lasts, look at all the attention you’re getting.”

“What’s the most dangerous thing you’ve ever done?”

“If we were gonna go on holiday somewhere amazing next week, where would you take me?”

These are silly, playful, and they give him a light challenge to either share something or impress you in some way.

With the last question, you can get into a roleplay where you describe in detail this incredible imaginary trip you’d take together – talk about where you would stay, what the hotel room would be like, and what you’d eat for breakfast.

This gets him to imagine being intimate with you and makes you stand out from other women he meets.

This works well with a guy you’re already dating. Just catch his eye from across the room at some point and hold suggestive eye contact for a while. He’ll be excited by the fact that you’re looking over at him and he’ll want to run over to get your attention.

Jokey-attraction is when you acknowledge that he’s attractive, but in a fun way that doesn’t make a big deal out of it.

For example, if you are both being cheeky and insulting each other, you can say “you are lucky you’re cute, because otherwise we would never get along”.

Or if he’s just teased you, you might respond jokingly “thank god you have those great eyes, or i’d have left ten minutes ago”.

You are creating some sexual interest by showing an attraction, but you’re also telling him that you could leave as well. Which makes him want to keep you as long as he can.

How difficult or easy do you find it to create sexual tension with a guy? Let me know in the comments below.

Want to learn 59 more REALLY simple flirting techniques to get in a guy’s head and make him crazy for you?