How To Get A Guy To Kiss You (Yes, Even Shy Guys!)

Surely men know how to kiss a woman right?

I mean, we guys fantasize on a daily basis about grabbing you in the rain and making out passionately like in the movies, and yet, that doesn’t mean we have that kind of courage in real life.

Just because a guy knows you’re having a good time on a date, doesn’t mean he knows when he has the green light to put his lips on yours.

So here are 6 basic steps of how to get a guy to kiss you: 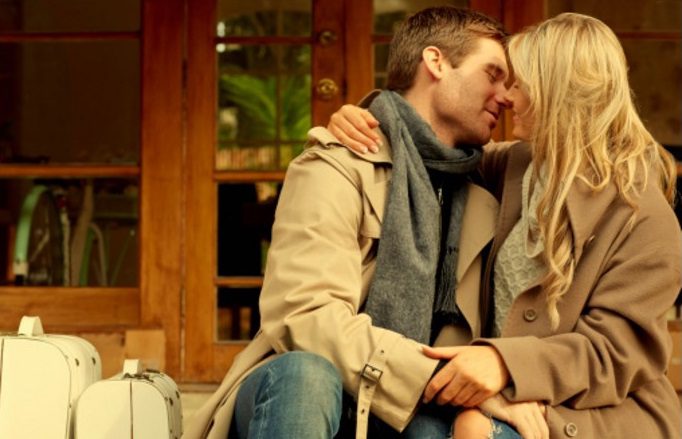 Kissing tends to happen not suddenly, but as a progression of movements, as you gradually get closer and closer. One easy way to start this off is to get him to touch your hands.

Stroking the back of his hand, playing with his bracelet or watch, or just move so close to him that your hands are basically touching. This makes it incredibly easy for him to close his hands around yours and bring you in for a kiss.

Give him a lingering look when you’re both close together. Make eye contact: not in an intimidating way, but soften your look, as though you’re looking at him expectantly but innocently, so that he knows it’s ok to go in for the kiss. Gaze up to his eyes, then down to his lips, then back up at his eyes.

Do this in a moment when the conversation dies down. He should know what to do at that point!

If he just won’t do it, say the actual words.

In a conversation, tell him how much you like his lips. Or ask him about his first kiss. It might sound a bit forward if you’re not used to it, but sometimes it’s the best way to get things moving! Those tiny risqué moments are where the magic happens.

Basically, if you want to get a guy to kiss you, make him think about kissing a lot!

4. Use the Grand Re-entrance method

Halfway through the date go off to the bathroom. When you come back, give him a lingering touch on his back and move in close to him. Look at him briefly and tell him you like his dimples, or that his cologne smells good; make it a physical compliment that shows you’re attracted to him.

This gives him a clear indicator that you’re (a) enjoying the date, and (b) physically attracted to him. It’s much easier to get him to kiss you when he knows you’ll be welcoming of his advances.

Don’t be afraid to put on some lip gloss in front of him or re-apply at some point during the date.

Having kissable lips is no bad thing and will only make him feel all the more courageous about crossing that gap from his mouth to yours. Make him want to kiss you by getting him to notice his target (i.e. your lips).

6. Linger when you say goodbye

If he still won’t make the move and kiss you, it’s time to take matters into your own hands. When you’re both about to say goodbye, linger for a moment after he kisses you on the cheek and wrap your arms around his waist. Look up at him and say, “I had a really great time.”

Now he practically has to go in for the kiss.

If he still doesn’t move in and you know he wants to, just move your face close to his and kiss him already!

Not every guy will need that kind of prompting but if you’re into the shy guy type, he may need every signal possible before he finally takes the plunge.