I’ve been surprised in dating how much that job interview rule applies: you probably know whether someone is a good fit within the first minute.

When you introduce yourself and begin talking on a date, you’re saying a lot about yourself in those crucial initial 60 seconds.

This is especially true nowadays thanks to the prevalence of internet dating apps, which have made it ever more likely that you won’t have spoken to a guy in person when you first meet up with him.

So here are five things you must know immediately if you want to win a guy over when you meet up with him:

1. Men are drawn to women with a joy for life

Do you greet him warmly? Do you smile and show you’re excited about the date? Do you seem like someone who has a passionate life?

A guy is noticing all these things when you introduce yourself. 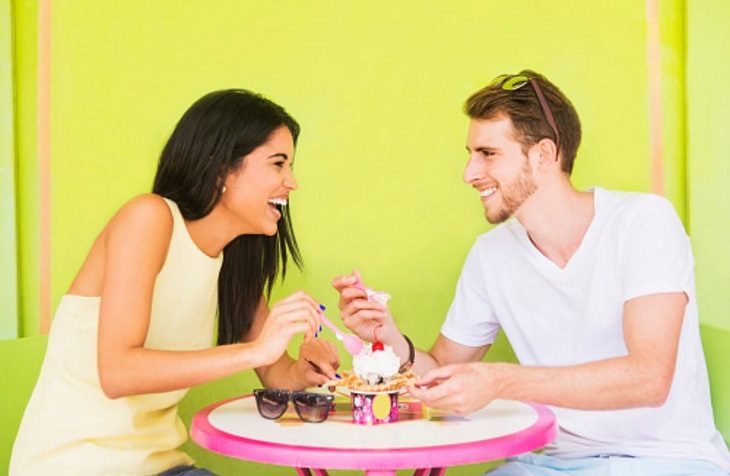 If you give him a limp-wristed handshake and have a neutral uninterested look, he’ll assume you’re going to be a major downer rather than someone who brings positivity and general good vibes into his world.

I just used the term “good vibes” and I kind of hate myself for it. But it’s true.

Guys are praying you’ll be easy to talk to. They are crossing their fingers hoping you’ll have a big smile and a great energy. He’s hoping you’ll answer his questions enthusiastically and show you’re the kind of person who is excited about what they’re doing.

It sounds like a lot of pressure, but really, this is what everyone should be like who lives with passion.

One thing guys notice very quickly is whether a woman is self-involved or interested in getting to know him better.

If you don’t ask any questions or seem like you want to hear more about who he is, it makes him feel distant and he’ll quickly be turned off.

It’s easy to fall into a passive mode of answering questions without reciprocating and showing genuine interest in the other person. Watch out for this trap in any interaction. Yes, men are often doing the impressing on a date, but he needs to see that you are intrigued by him as well.

You’d be shocked at how many women don’t do this.

3. Men want a woman who is self-expressive

How closed is your body language? Do you tend to hold back from expressing yourself or laughing or giving an opinion?

When a guy feels like you’re holding back, he feels like he’s not getting to the more vulnerable part of your personality that reveals your authentic self. If you have defensive barriers or you get uncomfortable with real conversation, he’ll often interpret this as insecurity, which is a huge turn-off on a first date.

If you want to date a confident guy, it’s crucial to show you are comfortable with being expressive and showing your authentic self.

4. Guys care about your attention to detail

Women are turned off by sloppy, disheveled appearance and so are men.

When he first sees you for a date he’s asking himself: Did she make an effort to look attractive?

You don’t have to always show up in the tiny red dress you save for formal dinners, but if you’re rocking up in ill-fitted jeans and a hoodie, no matter how pretty he finds you, he’s going to be asking himself whether you’re someone he could be attracted to long-term.

(FYI – I’m aware that guys are more often the culprits for being bad dressers, but believe me, as a guy who has been on his share of first dates, there are also women who don’t make the effort, and men do notice…)

5. The easiest way to make a guy want you is sexual confidence

Sexual confidence is not always easy to define, but it’s very easy to spot when someone doesn’t have it.

It’s the quality that makes you stand up and take notice of someone as something other than a friend. It’s the slight glint in your eye or the warm hug when you meet them that makes you aware of their body for half a second. It’s being comfortable with contact, even if it’s the a tiny touch on the hand or arm.

It may be more accurate here to say physical confidence, but either way, it’s this that really changes you from a potential friend in a guy’s head to someone he thinks about sexually. If you get stuck in the friend zone a lot, or don’t know how to get a guy to kiss you, this is the area to focus on!

By the way, in my accompanying piece on what men want I go into more detail about how to show this kind of sexual confidence but still remain challenging to a guy.

Now that you know how to make a guy want you in the first minute, you can nail that important first impression armed with the knowledge of exactly how to push his romantic buttons. It might feel difficult at first, but you’ll be thankful when every guy wants to call you to arrange another date!