Is It Wrong To Date Lots Of Different Men? 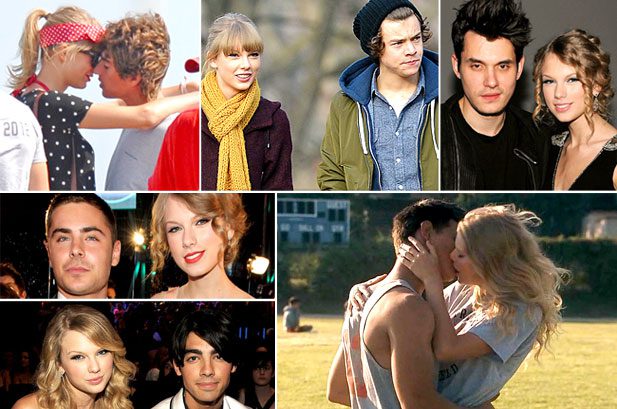 I don’t exactly have my pulse on pop stars and who they are dating but I have noticed that there seems to be a lot of vitriol directed at Taylor Swift and its not for whether or not she can hit all the noted. People, and more specifically women, seem to be very upset about the fact that she dates around a bit….ok, a lot. What’s confusing to me is that I hear a lot of women complain that when men date a lot they are considered studs and when women date a lot they are considered loose, so why all the hate directed at Taylor Swift?

At first I thought that it might be jealousy. She seems to have dated a lot of guys the most of my girl friends admit to having crushes on. Its understandable that you might want to put yourself in her shoes. And if she dated multiples of them it might even seem she was being a bit greedy. But, overwhelmingly, it seems its not about that but about the fact that she doesn’t take enough time in between relationships, or that she’s going through them to fast. Does the public only like Taylor Swift when she is heartbroken, alone and writing a song about it?

In my seminars I have come across the phenomena that when a girl likes a guy she immediately stops dating any one else. Again, this is when she just likes a guy. Not after the first time he shows interest, or after the first day. This starts when she sets her sights on him. My advise in this situation is always the same: when you are in the initial phases of liking or dating someone you should always keep the door open to meeting new people. That way just in case it doesn’t work out with the crush, you still have choices and options. It’s important to note that just because you have these options, it doesn’t mean you are exercising them, but simply having great people around you will have you putting less emphasis on the situation, which is really attractive to your crush.

The reaction I generally get from women is that they just can’t. Once they pick a guy no one else exists. I can’t imagine if I told them you should date multiple people or if I said its okay to date someone for a couple of months just to see how it goes and then have someone else lined up if it doesn’t.

Finding options and creating choice in your life is a challenge. A goal that can be accomplished with effort and some perseverance. Thinking that you don’t deserve to have them or that they are not appropriate for your life can be a major roadblock. Because even if you only want one special man, it usually takes a series of experiences with MEN (plural!) to get there.

I want to hear from you: is it wrong to date lots of different men? Is it okay to date different men at the same time? Sound off in the comments below.

Looking forward to hearing from you.

69 Replies to “Is It Wrong To Date Lots Of Different Men?”