This is the second piece to be published on the Get The Guy blog from my brother Stephen. Steve helped co-write the Get The Guy book and is a wealth of knowledge on dating and relationships.

Today’s article is on the hot topic of lying when it comes to online dating. Enjoy! 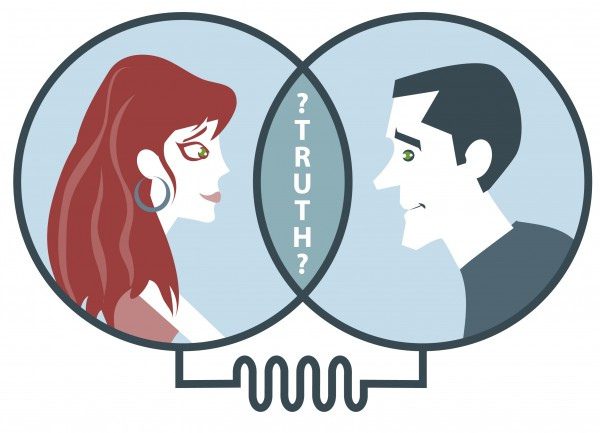 But apparently, most of us are liars, especially in online dating.

Match.com’s chief scientist Helen Fisher did some research into the site’s users and found that both men and women frequently lie in their online profiles. Fisher also offers insight into the different lies told by both sexes.

The research found that men tend to lie about two things – their height and their salary. Sometimes even the job title gets a generous facelift – e.g. “janitor” becomes “Hotel Facilities Consultant”, while “laptop repairman” becomes “Apple Management Inc.” etc.

This makes sense. Since being taller and richer are perceived to be attractive traits, men are prone to inflate both figures (there is another male measurement susceptible to this kind of exaggeration, but mercifully, Match.com doesn’t ask users to provide it).

Women, on the other hand, will tend to lie about their weight and their age.

These results shed light on male and female insecurities. Men want to be thought of as masculine and being able to provide. Height and salary are respectively perceived to be indicators of these two qualities, at least in the average man’s mind.

It’s the kind of caveman math you’d expect from the average male: Big man + Big bank account leads to big…woman? Or something like that.

The female lies, on the other hand, are related to being youthful, feminine, and physically beautiful. Age and weight are perceived to be quick shorthand for indicating such qualities.

What is interesting is that we often lie about these things even though we might not really value them highly ourselves. We lie because we perceive that other people value them highly. For example, a guy might not be bothered about his small salary, but he adds another zero on the end because he is convinced that women will be bothered about it. We lie because of our assumptions that these are traits about which the opposite sex care deeply.

I don’t judge anyone for telling these lies. Or, at least, I understand. Sometimes we lie, or selectively tell the truth, because we want people just to give us a chance. We know how ruthlessly people can judge in an instant (probably because the online world forces us to regularly confront our own ruthlessness – try Tindr and you’ll see what I mean), and no-one wants to be discarded for something as superficial as their age, height, or the size of their bank account.

We want that chance to say, “Wait! Let me explain how awesome I am first, then you’ll see it doesn’t matter!”, but the Internet is too fickle and fast to permit time for such protests.

Not all lies are malicious. Some lies we tell because we don’t want people to dismiss us based on their prejudices, or because we are insecure about how people will deal with the truth.

Frank Underwood put it well in House of Cards:

“I lied to him, but what choice did I have when the truth would have ended the conversation before it began?”

This happens all the time in relationships; people lie in the early stages or hide things about themselves because they are afraid of how their partner will react if they are just open and honest about who they are.

This theme of hiding in relationships is something I want to come back to in another post. For now, let’s stick to online dating.

Who do you want to turn on?

Although concealing certain truths is arguably necessary (who doesn’t hide their worst aspects in the first three dates – or three months – of a relationship?), there is a danger in hiding who you really are, and it’s this: There are lots of people who are totally, passionately, crazy into who you really are.

When we try to hide those parts of ourselves in order to attract everyone, we can end up attracting no-one.

Take a 32-year-old guy who is an aspiring painter, earning 20k a year doing the odd piece of freelance work. He might love his lifestyle, but he knows if he’s too honest about what he does in his online dating profile, many women will deem him a bad catch and brush him aside for guys with better prospects. Given that there are so many other guys who earn bigger paychecks, any woman interested in a guy’s salary could skip him without even looking at his profile.

But now the problem is obvious: This guy, who evidently doesn’t care about money, is now trying to compete for women who place enormous importance on a guy’s salary. Instead of selling what some women would see as his best asset (I once met a girl who said she found the “whole passionate-starving-artist-thing” irresistibly sexy), he’s trying to appeal to women with whom his lifestyle is completely incompatible.

Equally, why would a woman over 40 or 50 lie about her age to attract guys who are only set on looking for 30 year olds? What about those guys who really want a woman who’s older and just totally owns it and seems sexy and experienced?

I don’t want to seem naïve. I understand the online world can be deeply superficial and encourages snap judgments. And let’s be clear: being honest about your height, weight, age, or salary will turn certain people off immediately. But you can also lose a lot by hiding characteristics that others would see as a huge asset.

Online dating, for its ease and simplicity, encourages us to take a kind of catch-all approach. We go for the numbers game, trying to capture as much broad interest as possible – we invest energy in just trying not to turn anyone off. We focus on being everyone’s version of passable, instead of being one person’s ultimate fantasy.

We lie in order to conform, and partly just because we can, in an attempt to impress people who share none of our values anyway. Unfortunately, in the process, we can end up hiding those traits that might be someone’s version of perfect.

Maybe that geeky love of comic books and video games you have will make you some guys’ vision of absolute perfection.

Maybe the fact that you’re older will be just what a guy wants now he’s bored with dating one too many immature twenty-something girls who have no clue what they want in life.

Maybe the fact you have ten cats in your profile picture will make one man wild with a desire to drop everything and move in with you immediately…maybe…no…maybe just say you “like cats” to begin with.