There are many things I should be doing right now, but I feel compelled to write some integral learning points from an interview last week involving Russell Brand and news anchors on the MSNBC show ‘Morning Joe’. 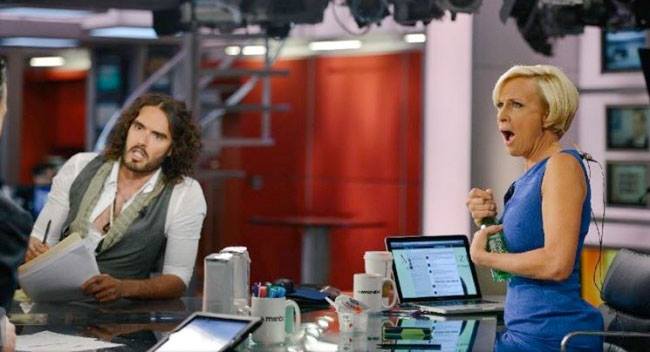 As you may have noticed, I’m adrenalised by all things human-dynamics, and nowhere are they more at play than in live interviews where anything can happen.

In this interview where Russell is looking to promote his upcoming US tour, we see Mika Brzezinski and panelist Brian Schactman continuously (consciously or unconsciously) attempt to belittle, trivialize and distract Brand with inane comments about his accent, clothes and general demeanour.

As a fellow Brit who does a fair number of interviews on TV here in the US, this is a subject that’s close to home as I’m often having to navigate my way through the etiquette of these kinds of shows, while trying to maintain the standards I’ve come to expect in life.

In this interview, the dynamic certainly wasn’t inline with what Russell has come to expect, and what ensues is a series of social blunders on behalf of the MSNBC staff which result in themselves and Russell clashing heads throughout the interview.

I have a couple of quick things I want to point out to you about this interview, which are best read once you’ve watched the clip.

I’ve distilled my points into six general principles that you can take to the social interactions in your life.

This situation is simply a microcosm for what we go through in our social lives, and the lessons to be learnt here are just as appropriate for use in our love life encounters…

1. Always be prepared to take things in the direction YOU want them to go in

Although Russell is there ‘to be interviewed’, he’s very much in control of the direction of the conversation.

When he sees it’s not going in the direction he wants, he simply changes the subject to one that suits him. The British lady in the interview attempts to put him on the spot by saying, “Can’t we get thirty seconds (of your routine)…now?”.

This is the equivalent of someone finding out you can sing and saying, “Well sing then…”. He doesn’t bother to entertain the notion, as this would immediately put him into ‘dancing monkey mode’.

Another great moment comes when panelist Brian is beginning a new question, and Russell unapologetically turns around and diverts everyone’s attention to the staff in the background on their computers.

He derails Brian’s train of thought and immediately brings the three anchors (and the viewing audience) into his world. Even though he is one against three, he is controlling the frame.

2. Answer the question YOU wanted to be asked

Clearly the motive for Russell’s appearance on the morning show is to promote his tour.

The hosts don’t make it easy for him as they ask superficial questions and create a very confused and pointless interview.

Russell takes back power by saying what he came on to say regardless: “Let me help you. I’m here to promote a tour called Messiah Complex… I want the people of America to come and see me do stand up. Go to RussellBrand.tv to purchase tickets to see me.”

It’s refreshing to see someone take control in this way, and it’s something we can all take on board in our every day conversations.

Always remember that when you have great things to say, you don’t need permission from somebody to say them, and you certainly don’t have to wait to be asked the right question before you can get to the answer.

3. Give no energy to attempts to belittle or patronize you

This type of belittling is what people are compelled to do when feeling insecure about a situation.

People get into a kind of mob mentality where their purpose is to bring the other person down. It’s clear by this point that the hosts are threatened by the unexpected intelligence of Brand, and these types of jabs are the result.

Instead of responding to the bait, Russell instead answers the question thoughtfully and shows how misguided their stereotyping of him is.

4. Don’t be afraid to break rapport when people aren’t meeting your standards

The need to maintain rapport constantly to the detriment of our own self-respect is one of the greatest barriers to our social prowess.

In the interview the anchors keep referring to Russell in the third person as if he’s not there. Mika says, “I think it’s just experiencing HIM, it’s taking it all in.”

Between the two women on the show, they manage to do this several times to which his replies are:

“You are talking about me as if I’m not here, and I’m an extra terrestrial.”
“You shouldn’t say ‘he’ when a person is present, you should refer to the person by their name.”
“Stop saying ‘he’. I’m present… ‘Russell’. What’s wrong with your manners?”

I love seeing someone maintain the standard they have from others, especially in a public forum where the temptation is to stay in rapport and avoid confrontation.

It’s interesting to note that when people are called out like this, very often things don’t result in confrontation, but rather just discomfort on their behalf.

When Russell says these things, rather than see confrontation, what we see are shallow attempts to get back in his favour. In short, the anchors start working to win HIM over.

Had he allowed these sub-standards to continue, he would never have gotten their respect in the same way.

In doing so they realized he had teeth (albeit that he was able to show them in an elegant and classy manner).

5. When in doubt, put the attention back on the other person

One of the most evident moments where the power shifts is when Russell starts putting the attention on Mika personally:

“You’ve become nervous… Why are you nervous?” “What seems to be the trouble?”

This immediately puts her on the back foot and takes her attention away from him and back onto herself.

When looking to build attraction, this can be done by complimenting someone, making a playful analysis of something they are doing, or asking a question about an aspect of someone’s behaviour that intrigues you.

When Russell says “Don’t be nervous”, he’s actually elevating his status to that of the leader; the person who is nurturing the anchor out of her own state of insecurity.

By this point in the interview, the positions of power are palpable.

6. Don’t be offended by people’s initial interpretation of you

Clearly these people didn’t expect Russell to be as sharp as he is.

If they’d paid more attention to his personality instead of his exterior they might have come better prepared.

We are all used to being judged wrongly in some way, whether it’s by the way we look, the accent we have, the place we are from, or the gender we belong to.

I would argue that as frustrating as people’s ignorant perceptions can be, we should take a minute to celebrate this, as it’s the thing that will allow us to fly completely under people’s radar and surprise them.

When you’re a 7-foot tall grizzly bear, everyone sees you coming. But a cute little dart frog sneaks in unnoticed, and unless someone told you it has enough poison to kill between 10-20 people in one sitting, you’d still be more afraid of the bear.

If those around you want to underestimate you, let them.

If you enjoyed this article and want to take things to the next level in your love life, I have something for you. Learn everything you need to know about attraction, what men think, and how create a spark that lasts.