The Skinflint: Why He’s Tight And What To Do About It – Men’s Personalities Part 1

After talking to many women about the different types of men they meet, usually the wrong types! We decided to put together a 5 part series on which male personality types you may have already dated or are currently dating and what you can do to slowly change him for the better. 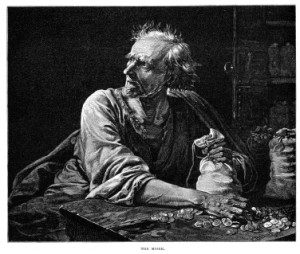 Etymology: Flint stones were used in olden times to start a fire. The term skinflint derives from the idea that a miserly person would go to the extreme and “skin a flint” or use a flint till it’s as thin as skin

1: one who is very reluctant to spend money
2: scrooge
3: pinchgut

All of us are enthralled by this fundamental unit of modern capitalist society: money. Whether you agree with me it of not, you cannot deny that money takes on a particularly pivotal role in the dating world. I would imagine that every woman reading this has her own opinion about the role that money takes, (or should take) in male/female interactions. And there can be no doubt that it dictates our view of others, especially the men that we’re dating.

But Why Are Some Men So Reluctant To Spend A Dime On You?

An article in the New York Times showed from recent Census data that women in the decade after college, make more now on average than men. Today men are on their weakest economic footing vis-à-vis women in history. But do we really believe it’s because they haven’t got the dosh to take us out? Is it only recently men have become so tightfisted? Of course not: they’re stingy, and you want to know why!

Most men, even when not restricted by their disposable income, are overwhelmed with alternative means of how they spend their money; ski trips with their friends, refurnishing their apartment… the list is endless. Assuming that they do have the money to allocate to their dating life, think of this from a man’s perspective; in the way that men think (or as close to that as you can possibly comprehend!).

If you’ve got £200 to spend, and you can either take the ‘safe’ option of investing in an “asset” i.e. a new outfit or something that is going to last a long time, or you can take a risk and spend it on a date with a woman you barely know, (and if things go badly, it’s completely wasted) what would you do?

Typically men are very resourceful as well as reluctant to take any sort of financial risk, even if they’ve got plenty of money. If there is even the slightest hint of doubt in how well a date could go, men will often not want to take the risk. To prevent a guy from ever reverting to thinking like this, you have to lower his perception of risk in his own mind.

To do this, before the date, message him and reassure him of how excited you are about meeting up with him. If you already find yourself in this predicament, the best thing to do after a couple of dates is to really give him signs that things are going well so it doesn’t seem like such a big deal for him.

The second reason may actually come as a surprise to you. You may think that the more money a man earns, the more he’s willing to spend when he’s dating or with his partner – but this isn’t necessarily the case. In my experience the wealthier a man is, the more suspicious and paranoid he can become around women. All these wealthy men can ever think about when they’re with a woman is, “Is she really laughing at my joke, or does she just love eating at Le Gavroche, for £95 a head?” So to protect themselves, from potential ‘gold-diggers’, they never spend a dime with women they’ve just met.

If all your flirting and compliments have been centered around materialistic things; his watch, his car, et cetera, this may be why he has put a sudden holt to the spending. If you suspect this to be the case, you need to build a real connection with him, beyond the superficialities. Compliment him more on his attractive personality and the real reason that you’re drawn to him as opposed to his possessions. With time he will realize that you’re not after him for the money.

What are your thoughts on skinflints? Have you dated one? If so did it end or are you still together?? Let us know your thoughts ladies…

20 Replies to “The Skinflint: Why He’s Tight And What To Do About It – Men’s Personalities Part 1”