The Logical (But Stupid) Reason Most People Miss Out On Life 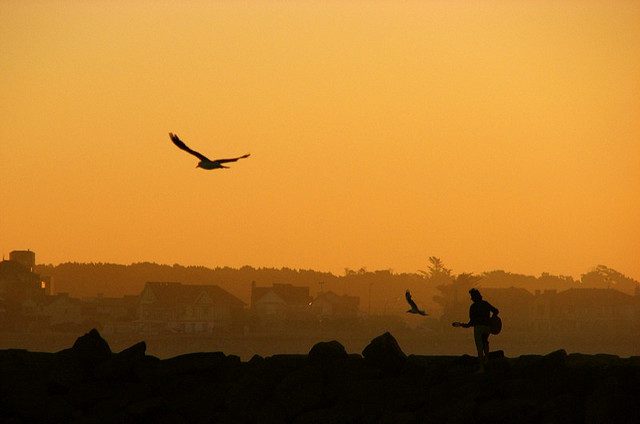 There’s a quote from Hugh Laurie, the star of House, that really captures the tragedy of not going for the opportunities in front of us:

“It’s a terrible thing, I think, in life to wait until you’re ready. I have this feeling now that actually no one is ever ready to do anything. There is almost no such thing as ready. There is only now. And you may as well do it now. Generally speaking, now is as good a time as any.”

I have to constantly fight the temptation to wait until I’m ready. I’m liable to be the kind of person who thinks they just need another week on that project, or a few more practice runs before I’m ready to expose myself to the world.

The only way I’ve been able to achieve anything is when I had people around me who didn’t play by those rules.

Here are few examples of times in my life I wasn’t ready:

1. Playing guitar in front of an audience

Despite years of casual picking and strumming, I am still a woefully novice guitarist.

I started playing in my teenage years, having begged my dad for an electric guitar. I would thrash my way through power chords and Blink-182 songs, usually hidden away from everyone else, and thought maybe in a few years at best I would be able play at an open-mic for fun.

Then a friend who was way better at guitar than me suggested that we should put together a little band, and as soon as I tentatively agreed, he declared with excitement in his voice: “And we should definitely play a gig at my end of year party in September as well!”

Now this scared me for two reasons: (1) I had never played in front of anyone (for good reason: I was, and am still not a good guitarist), and (2) This guy threw HUGE parties, which meant everyone from school would be there.

This guy was the social hub. He was responsible for those enormous end-of-school parties that happen once all the exams are over. His house was that place where everyone you knew would be invited (think Steve Stiffler in American Pie).

And now I knew that day was fast-approaching, I wasn’t allowed to wait any longer.

I practiced every day at my friend’s house, learning chords and endlessly practicing riffs, mostly because I was terrified of humiliating myself in front of my entire school year.

When the gig finally came, I got my first taste of singing with a microphone whilst trying to play guitar (it’s hard). I also had to deal with the technical side of keeping time with other instruments (even harder). I also had the horror of having one of my guitar strings snap in the middle of playing and had to swap guitars halfway through the song.

By professional standards, the gig wasn’t going to attract any record labels.

But it wasn’t terrible either. It was scrappy. It was loose and under-rehearsed. We nailed a couple of songs, and even though I was never going to be in a real band of any success, it was exhilarating to belt out a few chords and muddle through a few of my favourite songs with my friends (I was held up fortunately by genuinely talented musicians). For an evening I felt like an actual performer.

The crowd cheered. People enjoyed the set. It wasn’t The Beatles’ farewell on a London rooftop, and we were in no way ready to perform, but because I was forced, I got to learn a thousand lessons about performing on stage that I would have never learnt otherwise.

During my university years I decided to jump on a popular bandwagon and get into the sport of rowing.

At first, I was totally unfit to be any sports team. I had strength, but my aerobic fitness was nowhere near the level it needed to be to seriously compete.

I considered leaving it and waiting until the following year.

When I squeezed through the trials, I knew I had gotten a lucky break (I’m 6ft 1 and have a lot of natural strength). I thought maybe I would just enjoy the training, but didn’t hold serious hope of being picked for the final eight who would row in the summer competition.

I thought I could hide away, just train, and maybe think about seriously competing in a race next year.

But then our coach sprung a surprise on us: “Our first competition is in six weeks. I want you all to be race fit and ready to compete by then”.

If you’ve ever tried rowing, you’ll know that it takes weeks or even months just to be able to row in a boat that’s balanced and stable, let alone being ready to compete and face off against other crews in an aggressive head-to-head race.

And yet somehow that’s exactly what we did. I trained every day. I got fitter than I’d got in my entire life. After six weeks, we competed in our first competition and reached the quarter finals. Then, after another six months of grueling early mornings and intense team workouts, I was asked to compete in the biggest race of the university summer calendar.

Bear in mind I was still not a great rower. I was fitter and stronger than I’d ever been (the exquisite joy of finding abs on your stomach!), but was I really ready to compete in big races? Not really. I still had sloppy technical problems. I screwed up and took some dodgy strokes in races.

But suddenly, waiting to get ready was no longer an option. We were booked to compete so we showed up, ready or not.

Over that year we won way more races than we lost, and were hailed as one of the strongest teams on the river. I’m looking up at my award (an enormous rowing oar with our crew’s names painted on it) right now as I write this.

It’s funny now to think I was so close to bailing out from one of the best sporting experiences of my life because I didn’t feel ready.

3. Meeting Girls and Having Relationships

In my early adolescence, I spent a lot of years watching other guys have all the fun with girls because I couldn’t bear to put myself on the line.

I wanted the perfect scenario, and it never came. For years I told myself I would meet girls in a few years, when I was more successful, older, and confident.

I said I would do it when I knew what I was doing. I said I would approach women when I felt ready and in the right mood. I said I would take chances with girls once I had got a six-pack in the gym after working out for 6-8 months.

I used to think of all kinds of reasons why I just couldn’t take that initial step. Why the circumstances just weren’t right for me to meet any girls whenever I went out.

As I got older and developed my abilities, I became much more confident. I had friends (and a brother) around me who pushed me and wouldn’t let me off the hook.

But with that came new excuses.

The irony of all these situations is that I had it the wrong way around the whole time. I had told myself that once I was ready, I would be able to commit to serious action.

The opposite was true: Once I was forced to take serious action, I began to get myself ready. And it always led me to extraordinary experiences.

Saying yes to playing a gig put me in front of an audience and taught me how to hold the attention of a crowd.

Saying yes to a rowing competition got me to learn how to row and helped me achieve success at a high level.

Saying yes to meeting women and having relationships gave me access to a whole range of colorful experiences I can’t go into here.

Every stage of my life I now know to look for that feeling of not really being ready.

Anything I feel too prepared for, or that doesn’t involve even a tiny sense of danger, is usually something I’ve already outgrown, or something that isn’t going to give me a new experience.

My challenge to you is to find ONE area you can be a complete novice at, or at least one area you are putting off taking chances in today because you don’t feel ready.

Write down below how you’re going to force your hand so that you take some action towards it this week. Make it something that gives you that tiny knot of fear in your stomach when you realise you’re going to have to do it.

Then chase that feeling.

Six months ago I remember being in a restaurant with my friends and getting a phone call from Matt. “Can you go outside?” he said.

He was excited to tell me about his brilliant new idea – to have me write regular articles under my own name for his website. But while he was enthusiastic and fired up about it, I felt that old immediate sensation of discomfort and nerves flood my body. I had my usual feelings of hesitation, even as Matt reeled off all the reasons why it would be a great idea. I could sense his vexation and concern when he heard in my voice that I was on-the-fence about the whole thing.

“Just think about it this way” Matt said “it means that your stuff is going to be read every week by thousands of people. Pretty cool right?”

I told him I’d think about it. I wasn’t sure if I was ready.