Why Condoms Should Never Be The Enemy Of Romance 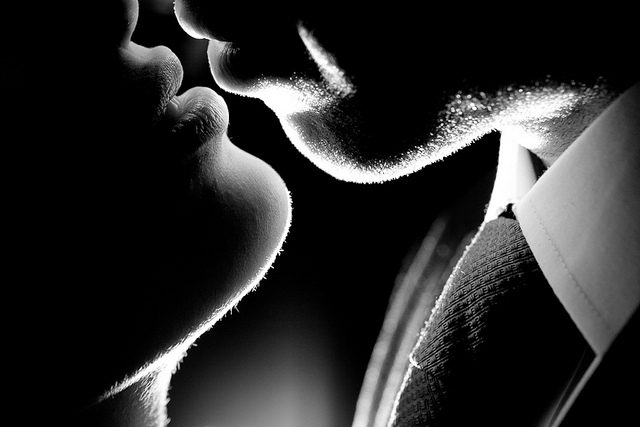 There are many ways to kill the mood during foreplay.

Maybe the guy you’re with breaks wind at an inappropriate moment. Maybe someone has to extract a hair from his or her mouth during an extended intimate ‘warm-up’ session. Or maybe, just as things are about to get to the main event, he has to hit the pause button and say “hold on, I need to rummage around my bag for a minute to find a packet of rubber tubes so that I can slip one over my penis”.

He starts searching around his overnight bag. He removes a box, and, with his teeth clenched around the plastic covering on the outside, he begins the awkward process of opening a fresh box of condoms whilst trying to look sexy.

Needless to say, he fails.

But wait, it could be worse. Much, much worse. He could rummage around his bag for an excruciating couple of minutes, only to emerge with nothing but the dreaded phrase: “I forgot to bring one…”

Well, now you wish he was awkwardly opening that condom box. Because now you have a dilemma. Let’s suppose this guy is your new boyfriend. You’ve both been having sex for a while now, but just this once he hasn’t got protection. Maybe you think: “I trust him. He seems really safe”. Besides, you know he doesn’t sleep around much so there’s little chance he’s carrying an STD.

“What about pregnancy though?!” You suddenly freak out and panic. “But hold on…” you remember, “it’s not the right time of the month anyway. It should be ok…should be…”

Now your resolve is slipping, and you’ve started down the road of having unprotected sex with your boyfriend. Who knows, maybe this time it will be ok, but you know you’re taking a huge gamble with your future. Even if you happen to be taking the pill, you know there’s a chance that ‘just this once’ could still mean you get unlucky and catch something other than a baby you didn’t plan for.

Should You Trust Any Guy With Your Sexual Health?

Now, I’m not against having unprotected sex under safe conditions with someone you love and trust. But recent research undertaken by Trojan™ Brand Condoms has shown that 62 percent of people with repeat partners stop using condoms regularly within two months of a new relationship.

What’s the big deal though? The big deal is that the research also shows that the decision to stop using condoms is being made without exchanging important sexual health information and discussing alternative forms of protection being used. Sixty percent indicated they had not been tested for STDs and two-thirds indicated their partner had not been tested, with more than 1 in 3 not using another form of hormonal birth control.

For me, those are pretty worrying statistics.

See, a lot of people say they have trust and intimacy with their new partner, so why should they be worried? But this isn’t about trust. This is about taking responsibility for your own body. Something everyone has to do. Trust has nothing to do with it when it comes to seeking assurance from your partner that they have a clean bill of health and are fully tested. It’s not a question of trust, it’s a question of both of your safety.

You might get a guy who tries to talk you into it, and tell you how good it feels without a condom. He might even say that he can’t even enjoy sex when wearing one. Or perhaps he’ll just reassure you and say, “I’m not seeing anyone else, and I’m totally healthy. It’ll be fine”.

How do you handle this critical moment?

Maybe you think “Well it’s just up to him to bring a condom. It he doesn’t bring one, then we don’t have sex. That’s the rule.” But do you really want to put yourself in a situation where there’s even a chance you would slip up and have unprotected sex? For me, I know that this is an area of my life where I want to take zero chances.

I’ve known friends staring down the face of STDs and unwanted pregnancies, and I’ve seen how they chide themselves for being so dumb and cavalier with their partner when it came to wearing protection.

See, we assume very quickly in a relationship that we are safe simply because we’ve known our partner for a while. It’s a stupid bias, and truthfully, there’s absolutely no reason to take the chance until you’ve both had a full sexual health test and have considered (and adopted) alternative forms of birth control. For me, as a man, I know a condom is the only way I can feel peace of mind. A condom is the only form of contraception that protects against both STDs and unintended pregnancy.

How To Tell A Guy He Needs To Wear A Condom

For women, insisting that a guy wear a condom is also your best way of having peace of mind, knowing that you can’t catch anything before you know for certain you’ve both been tested.

But of course, it’s all well and good having this standard and talking about it soberly here, but how do you communicate all this to a guy when The Condom Moment arises just before sex?

The best way is to not treat it as a confrontation –there’s no need to say, “it’s your duty to wear a condom, now get your rubber helmet on or get out soldier!”

A better way to approach this is to show that it’s about you, not him. In other words, if he asks whether he can stop using condoms because you’ve been together for a month or two already, and you’re not sure how to handle it, you say “Look, I love having sex with you and being with you, but I just don’t do that. I use condoms when I have sex for my own safety”.

When you say it like this, you are firm, but you’re also communicating to him: it’s not a matter of trust, it’s a matter of safety.

You always have a right to do whatever you need to feel comfortable and safe. And the reason I decided to say yes to this campaign with Trojan™ Brand Condoms is because I wholly believe that you can’t have great sex when you don’t feel secure. Safe sex is indispensable for great sex.

Woman or man, it’s your own responsibility to look out for your own sexual health. If your guy is truly right for you, he’ll respect this completely. A great guy will actually be more attracted when he sees that you take safety seriously (especially since guys worry about this stuff just as much as women!).

I’ve broken many of my own rules before in relationships and made mistakes, but one I never break is perhaps my simplest and abiding principle, one which I recommend making your own: Safety is sexy.