Why Is It So Hard To Meet Men?

For a while now I’ve repeatedly heard a similar question:

“Why is it so hard to put the advice I hear into practice?”

“When it actually comes to meeting guys I see, all the confidence flies out of my head and I freeze. What can I do to get over this?” 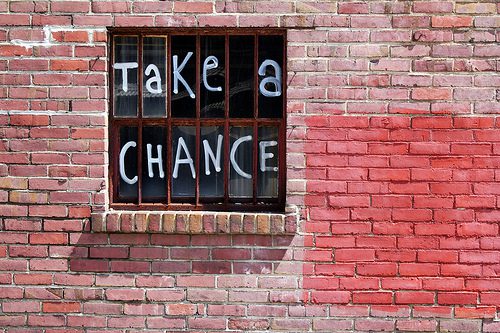 I feel compelled to address this, because I hate the thought that people wish they could take a chance that would benefit their love life but just can’t bring themselves to do it.

When we repeatedly fail to act on our desires, it makes us lose faith in ourselves. It’s painful to constantly feel as if you’re on the precipice of taking those chances, but always falling short of pushing yourself over the edge and just doing it.

So maybe you see that attractive guy at a friend’s party. Maybe he hovers around you, mingling close by and you just want to engage him in conversation.

Why are you now freezing up? Why does this now seem like such a big deal?

Chances are you feel these opportunities slip by all the time.

And it’s not for one single reason. It could be one of several bad beliefs that you’ve come to allow to hold you back.

Let’s look at a few:

1. You are expecting too much of yourself

Talking to guys is scary if you’re expecting yourself to get everything 100% right first go around.

This unrealistic expectation is also why people freeze up in auditions, job interviews, public speeches – instead of working on just being their imperfect selves, they are terrified of the tiniest slip-up, so they bail from even trying in the first place.

2. You’re taking the conversation too seriously

Yes, it is a bit nerve-wracking if you ask the guy next to you how his day is going. It can feel scary even just to tell the barista at Starbucks that he has a nice smile. Your instinct may be just to look down, throw your money on the counter and get your head buried in a book in the corner.

All you’re doing is talking.

It’s not the strangest thing in the world. And guess what? You’re supposed to feel a little bit nervous. The trick is to turn these nerves into a bit of excitement. Your brain needs to switch from running away every time you feel fear, to seeing fear as a call to move forward.

3. You don’t remind yourself why this matters enough

It’s easy to put anything off for another day.

You can convince yourself that it’s safer to hang back for now, just like the aspiring artist tells himself it’s easier not to paint today. After all, what he paints might not come out exactly how he imagined in his head. It’s more pleasant to stick with the idea we could if we could do, instead of putting ourselves on the line today.

I know I’ve had to fight that instinct over and over again.

The trick to getting over it? Get more addicted to TRYING than you are afraid of failing.

Failing rarely matters. In most areas of life, we can just try another approach. If the aspiring novelist writes a pile of junk, he can always throw it in the bin. Or write another. Except this time he’ll have all the added experience of that last attempt to draw from.

Get addicted to experiences, and you’ll have a real WHY that spurs you to be a trier, instead of the person who stays home or waits on the sidelines.

4. You are not making it FUN

Most people’s entire social world is confined to the 3-4 friends they call up on the weekend and go for dinner with after work.

By not allowing yourself the joy of meeting new people you’ve cut yourself off from a lifetime of potential fun and pleasurable moments that could have changed every single moment afterwards.

I talked last month about vulnerability.

Vulnerability is risk, but it’s also where all the juice comes from. I think back now to the memories that came from having the first conversation with a girl I wanted to approach and it blows my mind to think they wouldn’t have happened if I didn’t just say one word, even “hi”.

The euphoria afterwards can make you feel like you’re on drugs. Taking chances is a natural high you don’t need to run 10 miles to feel.

Find a way to get that buzz whenever you can. Send an email to someone you admire who you never expect to reply. Ask for extra dessert at the lunch counter (just because). Get into a conversation at a bookstore. Pitch an ambitious business idea.

Meeting men isn’t hard. Taking risks can certainly be hard. But luckily, most risks in our lives are just perceived risks.

Confident people aren’t especially braver than anyone else: they just realise there was never anything to lose in the first place.