Why Men Put Women In The ‘Maybe’ Zone 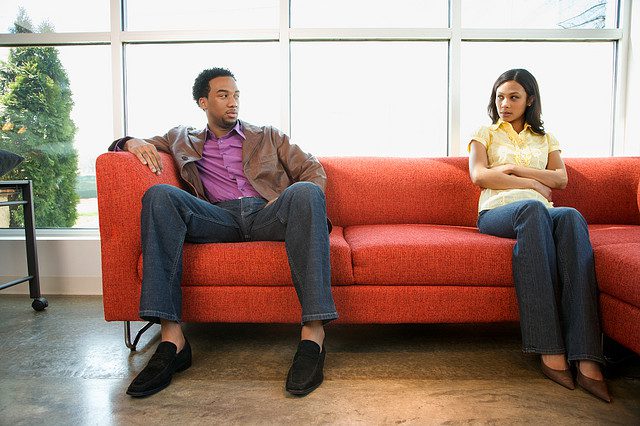 You know you’re in The Maybe Zone when friends repeatedly see you with a guy and ask inquiringly: “Are you guys a couple?”

And your response is to shrug your shoulders and say: “I’m not sure really”, or secretly to yourself, “I’d like to be!”

Within The Maybe Zone there are typically two big traps.

Someone only counts as being in The Maybe Zone if they secretly, or explicitly, desire a relationship with the person in question, but remain frustrated in their efforts.

Let’s explain both of these traps individually and why different kinds of people fall into them.

The Friend Trap is an old familiar favourite. It’s commonly seen as something that afflicts men, but 10 years of coaching has taught me that it happens to plenty of women as well.

The Friend Trap is when you like someone, you both get along like best buddies, except…that’s it. Nothing sexual EVER happens. It’s like one endless promise of hope over the horizon, where you think something could possibly-maybe-just happen one day, but every time you feel like you’re getting close they bat off any romantic advances and leave you pining for them when they’re not around.

It’s like being on a perpetual first date that’s going really well but the guy never goes in for the kiss, (even though he would totally score if he did).

It gets frustrating. You can tell he loves being around you and hanging out, hell, he may even hug you now and then like a boyfriend, but he never initiates anything more physical. Is he just incompetent? Shy? That’s possible, but even incompetent shy guys take the hint eventually and can manage to guide their lips toward yours.

What’s more likely is that he does truly enjoy being around you, and possibly does even love your personality to some degree, but he doesn’t have enough deep attraction.

A guy you’re friends with can have all the Connection and Respect in the world for you, but without Sexual Chemistry, he’s not going to be able to feel real attraction for you.

Annoying right? It’s probably a bit annoying for them too. A lot of men and women wish they felt sexual attraction for someone they are great buddies with. It would be an ideal scenario. But neither he, nor you, nor anyone else can force sexual chemistry if someone else just doesn’t feel it.

The onus is on you here to put distance between you so you can finally move on. Especially if you’re waiting around for a guy who actually enjoys the validation of the Friend Trap and stay there on purpose, enjoying your attention but never really making a move.

Screw that. Save your time. Save your emotional energy. Set yourself free and look for someone who reciprocates the love you have to give.

The Friends-With-Benefits Trap happens when you are having sex (or some sexual activity) with a guy, and although you want him to be your boyfriend he never wants to commit.

At first you think he has issues with commitment, but then maybe you realise you’ve seen him with a girlfriend before.

He calls and texts you like you’re his girlfriend sometimes, but he only wants to meet when it’s convenient for him. He never wants a proper date and every time you bring up any relationship conversation he reminds you he’s “just having fun”.

Now in this case, unlike the Friend Trap, the guy clearly has Sexual Chemistry with you. But somewhere your relationship is lacking in either Connection or Respect.

Some women will be tempted to think that Respect is linked to them having a sexual relationship with him too soon, but that’s not true. Respect isn’t inherently linked to sex, and unless he has a very antiquated and out-dated mentality, he’s not going to judge you for having sex with him outside a relationship. Respect in this scenario is linked to other things. In the Get The Guy book Matt and I used the term ‘Perceived Value’ which might be a better way to think of Connection and Respect in this context.

Perceived Value can be linked to many things.

These are just a few things that will cross someone’s mind (men AND women) when they think about a relationship, and if they doesn’t imagine them happening then he’ll place you in the Friends-With-Benefits Zone. It’s the place where he likes you, he’s attracted to you, but he doesn’t feel enough pull to see something more serious happening in the long-term.

The first thing to remember is that it doesn’t make someone a bad person just because they don’t want a relationship. Much of the issue simply comes down to compatibility.

Likewise, with the Friends Trap, just because he’s not into you physically doesn’t make him a jerk. What does make him a jerk in either circumstance is if he strings you along without ever making his true intentions (or non-intentions) clear.

The trick in handling this situation is twofold:

(1) Don’t be too judgmental in either situation (unless he willingly deceives you and pretends he wants something else). Just recognise it for what it is and spot the signs of a guy not moving anything forward either emotionally or physically.

Is there a way to get out of these traps and still get into a relationship with the same guy? SOMETIMES.

But here’s the problem. Once someone has a fixed opinion of you, it can be difficult to change it.

In the case of the Friend Trap: The preferred option should always be to put distance between you. You can still be nice to him, but you can also be totally honest and say “I have feelings for you, and need to put some distance between us in order to stay friends”. If he’s really a friend, at this point, he’ll understand.

Or if that seems way too dramatic, just stop putting yourself in any one-on-one scenarios with him altogether. E.g. no sitting at home together watching movies, no more ‘buddy-dates’ where you both go for dinner together and hang out all night. Make it a rule to only see him in the company of others, or not at all.

It will feel hard when you like the guy, but believe me, it’s much easier than wasting a year or longer pining over him when he doesn’t have romantic feelings for you.

Remember, just because one guy isn’t attracted to you, does NOT mean you are unattractive. He’s one guy, there are others. And the longer you pine after one person who isn’t interested, the longer you’re missing out on an amazing guy who would be a model boyfriend if you were only available for him to find you.

Moreover, it’s always your own responsibility to remove yourself from the Friend Trap. Even if he’s clearly loving the attention and enjoys being ‘buddies’ with you: if you’re the one getting hurt emotionally, it’s up to you to notice this and remove yourself from the situation without being bitter. It’s up to you after that to decide if the friendship is really worth keeping.

In the case of the Friends-With-Benefits Trap: You have slightly more chance of winning him over here since at least here you’re beginning with sexual attraction, which is obviously crucial before any kind of romantic relationship can occur.

But here’s the thing.

Once a guy has made up his mind, or told you he doesn’t want to commit at all, it’s always, ALWAYS best to take him totally on his word. Otherwise, even if you end up getting a guy to sleepwalk into a semi-relationship for six months, he can easily turn around and break it off all of a sudden when he freaks out and realizes things have gotten too serious for him.

Your priority and ultimate mindset should always be: “I don’t want to waste time with guys who aren’t already sure they’re crazy about me”.

You don’t want to convince a guy to want a relationship with you. If he gives you ‘the talk’ where he says how he just wants to be single and have fun, just smile and say “that’s cool”. Then withdraw. Not coldly, not spitefully, but just in a relaxed way. Show him your standards in that moment. You want to withdraw affection in a way that says: “that’s cool. But that’s not what I want. I need someone who wants more commitment right now.”

A guy’s respect and attraction will go up intensely in that moment just for seeing you stick to your standard.

Now go meet other guys and forget about this one. And maybe, just MAYBE, at some point down the line you might both re-connect in another place and time and he’ll wonder why you didn’t ever get together (but again, don’t bank on this happening, it only may happen, but the point is, you do NOT need it to).

If he never calls again, no harm done. You’ve spared your time and your affection for guys who are worth both.

Remember, both the Friend Trap and the Friends-With-Benefits Trap aren’t like your regular trap. You can open your eyes, see the writing on the wall, and walk away at any time.

The Maybe trap can be seductive, but it only exists so long as you choose to remain within it.