The Worst Things You Could Ever Say To A Guy 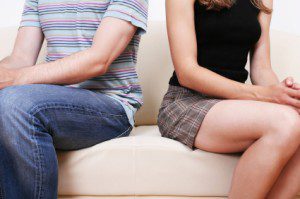 We focus a lot on what to say in interactions with men, but sometimes half the battle is knowing exactly what is the worst thing to say to a guy, and avoiding ever saying it again!

So here’s a list of phrases you should never say to any guy you want to continue dating and want to build attraction with:

“If you really cared about/loved me….”

No matter what the context, this will put a man on the defensive. Saying this will only make him more defiant, or turn him off of the idea of whatever you were about to say.

1. Insulted that you think he doesn’t care

2. Angry because he feels tested

“We need to talk”

This is a recurring contender for the “worst thing you could say to men” prize.

Even if this is for something positive, it sends a shiver up the male spine. If you say this to pre-empt a conversation about commitment he’ll immediately feel like you’re talking about “big scary stuff” and it will freak him out. So even if he wanted to commit to you he will now feel like he’s getting told off for not having done so already!

The bigger you make the conversation, the bigger the issue is in his mind.

Being obsessed with your man’s opinion about other women communicates neediness. He’ll feel like he has to reassure you or that you’re fishing for a compliment.

That’s it, really. Anything about your ex.

There’s rarely ever a reason why your ex or previous issues with men should be brought up with your current man. He’ll wonder why your thinking about him, and even if you don’t he’ll imagine you still have issues about it.

And finally, anything that implies you’re not bothered about/don’t enjoy sex

Men’s self-esteem is hugely wrapped up in how you feel about them sexually.

Anything hinting that you don’t enjoy him in bed, or don’t look forward to sex as much as he does immediately emasculates him and will even make him feel less attracted to you.