How To Get A Guy To Propose – Without Pressuring Him 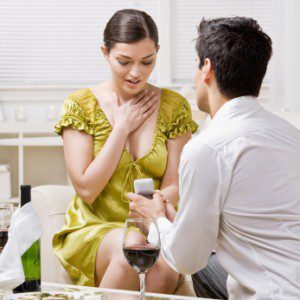 There will come a time in your relationship with the guy your sure is ‘The One’ when you want nothing more to take the next step, get engaged and continue the rest of your life with him by your side.

However tradition has it that you have to wait for your man to propose so it seems your destined to become one of those girlfriends that gaze at him meaningfully during your friends weddings, walk painfully slowly past jewellers and ask him what he would call his children.

Well it really doesn’t have to be like this!

a) A man proposing under pressure will be a man likely to bolt down the aisle on the day, when he realises he wasn’t ready.

b) Pressuring him means he is more likely to bolt before the proposal has taken place as he is feeling like you have been trying to trap him.

Most men do want to marry the woman they love. They do dream of settling down and having children. But it needs to be their idea. They don’t want to be scared by your talk of saving for a big wedding and what age you just start trying for children. As soon as the idea of getting married become something less like its in his control and more like something your threatening him with the less likely it is to happen.

But you can help by reminding him how happy you would be together;

1) Carry on having fun together,remind him your the kind of girl he would want to spend the rest of his life with, the girl he can have a laugh with, have great sex with and get silly on tequila with, your not an old married couple yet and you don’t want him to see you that way. Nagging him about going to the pub and spending nights in watching ‘Who wants to be a Millionaire’ will only discourage him.

2) Don’t be afraid to talk about a future that doesn’t see you two getting married, if its the opposite of what he wants it will spur him into proposing. I don’t mean you have to threaten him I mean talking hypothetically about a quite unlikely fantasy future that gets him thinking.

3) Talk about the future in terms of exciting trips abroad or things you would like to achieve together like learning a new language or financial achievements you aspire too instead of discussing mortgages and children.

Remember: He wants to propose to you, the woman he fell in love with, not bridezilla. But catching the bouquet at your friends wedding won’t hurt…

If We Move In Together Will It Make Us Happier?

Have you ever thought about moving in with your boyfriend? If so then you must understand the implications and how...