The Maudlin: Why He’s So Clingy And What To Do About It – Men’s Personalities Part 2

Clingy guys are possibly the worst types of guys to date, they hang on every word you say, come out with the most ridiculous statements and never seem to be fully independent, they somehow rely on you all the time. So can you change them or spot them a mile off? Yes, here’s how: 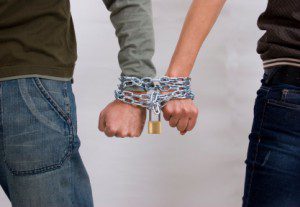 Etymology: originally surname of Mary, the repentant sinner. In paintings, she was often shown weeping as a sign of repentance. Meaning “characterized by tearful sentimentality” is recorded by 1630s.

Something that I often hear women complain about is that there just aren’t any REAL men anymore. Gone are the days where the average man could start a colossal fire with nothing more than a few twigs, all whilst wrestling off an alligator to protect their loved ones. This might not be your most everyday example, but I’m sure you get what I’m getting at; there is a definite lack of manliness, and women are really starting to suffer as a result.

Why Are Men So Unmanly?

I’ve been asked one too many times why a boyfriend has suddenly turned clingy all of a sudden; why he calls 5 times a day, and why he shows no sign of independence whatsoever. Now I don’t claim to be any sort of modern day John Wayne, but understanding the psychology of the sexes and the different conditioning that we’re exposed to, I know a think of two about what’s causing the uprising of the modern day ‘maudlin man’.

1) “We’re a Generation of Men Raised By Women”

To take one of the more controversial quotes from the movie Fightclub, one of the biggest factors that has caused a decline in the average man’s masculinity, thus causing all these side effects loathed by women, is that there is a series lack of male role models for men to look up to.

It’s not just in the media, it’s at home with families, with teachers in schools and nearly every aspect of a child’s life. For example, until the mid-nineteenth century, the vast majority of teachers were men. In 1870, women made up 2/3 of teachers, by 1900 this had grown to 3/4 and 10 years later by 1910 it had skyrocketed to 4/5! As a result, boys were spending a significant portion of their day at school without the influence and example of an adult male mentor.

To add to this, the father-son dynamic was thrown way out of balance by the Industrial Revolution; fathers were forced to abandon their land and workshop for a place on the assembly, and ever since, a regular 9-5 has been set in stone for the majority of men. Children spent all their time with mom who has always wanted to turn her boys into the young, charming princes of today – and it just doesn’t work!

(N.B. Obviously being brought up by only your father would leave other characteristics unnurtured, but that’s a whole other article!)

With the media exposing boys to lame role models, fathers missing in action and schools staffed primarily by female teachers, the current generation of men might rightly argue that they are “a generation raised by women.”
Where does that leave them and the future of masculinity? – In your hands: in the hands of the women that they are attracted too because as I’m sure you all know, what really makes or breaks a man is if he has a good woman behind him. But that woman needs to be able to tolerate him!

To stop him being so clingy, you need to reinforce a mindset or an attitude in him of masculinity, and this is a lot easier than you might think. If you can make a man feel like a man for doing something, he will always want to do it. For instance if you say to him “It really turns me on when you’re so strong about…”.Tell him how independent he is, how strong he is, how driven and ambitious he is; even if it’s for the smallest of things. By doing this he will want to live up to your expectation of him; thus you can get the best out of him!

2) The Perils of Having Divorced Parents

This reason links in with the previous point, but there are a number of different consequential effects for men from having your father completely out of the picture (assuming mum got custody)

Running the majority of my events and seminars in the UK I get asked all too often about clingy boyfriends. It comes as no surprise to me to find that Britain has by far the highest divorce rate in Europe – there is a definite link here.

The other day I read this piece of ‘comforting’ news: while it is popularly thought that the divorce rate is increasing, it has in fact been falling for the last three decades and is currently at its lowest level in 30 years. “Among those couples who are college-educated, the divorce rate is only 11%.” 11%? See to me that still seems ridiculously high! But somewhere along the line we’ve been led to believe that it’s okay and that divorce is just a natural thing:. It’s not. When you get married you are pledging your undying love and devotion to another human being – for your ENTIRE life. When did the sanctity of marriage become so frivolous?

Anyway, that’s enough of a rant from me (being a dating coach and all this kind of thing tends to annoy me): back to how it affects the psychology of men… Having gone through the trauma of witnessing their parents divorce, many men subconsciously feel that it could happen to them, causing them to develop a tendency to be extremely clingy. And again I’m afraid it falls onto you, the women they go after, to reset the way they think.

You have to reinforce an attitude in them for not being clingy. Or alternatively, you can challenge their manhood if it pertains. For example, if you’re boyfriend is doing something particularly maudlin, you could say “It’s such a turn off when…” – I assure you that whatever you finish this sentence with, he will never do again. And getting a guy to be less clingy is really that simple.

What are your thoughts of ‘Maudlins’? Have you dated one? If so did it end or are you still together?? Let us know your thoughts…

4 Replies to “The Maudlin: Why He’s So Clingy And What To Do About It – Men’s Personalities Part 2”