His Silence Explained: Four Reasons Why Guys Won’t Go For A Second Date 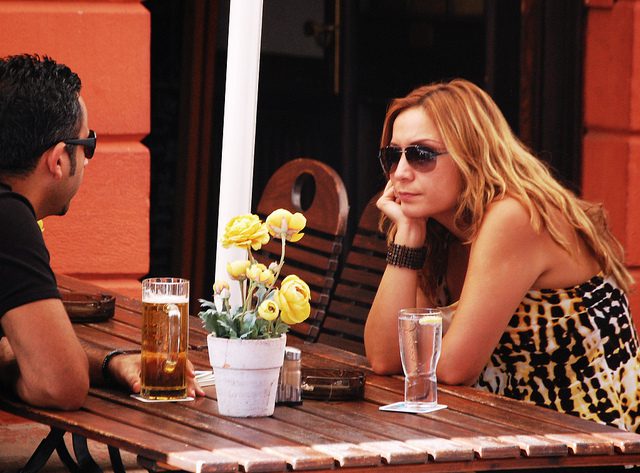 ‘This is going to be a long one…’ (Photo: DanielSilliman)

Lots of us see first dates as an ordeal that has to be got through in the quickest, most painless possible way. We bemoan the artificiality of the whole thing, the way you have to overdress, go to some bar you don’t even like, be on your best behaviour and sit through the ‘getting to know you’ chat, then brag about a few of your achievements and hope that you were impressive enough to get a second look-in, or a kiss, or a “we should do this again sometime”.

Not the most enticing offer, right?

But first dates are important. Every relationship needs a beginning, and that usually comes in the form of a first date.

And I know, it’s one of those topics no-one can ever stop giving advice about. Everyone has their own little tips and tricks, or strategies and rules about what you can and can’t do. Or there will be hidden tests, like looking to see whether he holds doors open, gauging whether he’s a cheapskate, or looking for early signs that he might be a player.

There are all kinds of traits and behaviours that can stop us wanting a second date. So today, I want to ask: What are those big turn offs that prevent a guy from calling you up to meet again? I’m not trying to call out women here by the way, as the reasons given below can apply to both genders. There’s no doubt whatsoever that guys can be accused of all the negative traits listed below.

Nevertheless, I can draw from my experience of coaching, interacting with, and generally being a guy, and with that in mind, here are four big reasons guys get scared off after a first date…

This usually happens if conversation stays on those standard topics like work and never really makes him feel any emotional connection. It also happens if a first date is missing all of those fun elements that add sexual tension – teasing, jokes, flirting, showing your playful, cheeky side. It’s particularly easy for women who are used to being dominant at work to fall into this “serious-mode” trap, and it can take some practice to get out of it.

Surprisingly, perhaps, men have a well-honed radar for women who seem superficial or shallow. (Note – we are talking about high quality guys here. Of course, those men who are only looking for one thing might be less picky). A first date for a guy is a chance to see if the woman he’s on a date with has standards and integrity. If she just agrees with everything he says, or isn’t able to talk about anything deeper than what she had for lunch today, it’s enough to ensure he doesn’t want to repeat the experience any time soon.

A man will say this if a woman brings up her exes, or bad previous relationships, or if she seems to get easily upset when little things go wrong. These little behaviours spell out “drama queen” for a guy, and it’s a big reason that men get scared off early on.

This obviously applies to both genders; first dates should never be a place for us to vent about our problems and hang-ups.

As I said, these aren’t all gender exclusive – a guy could be guilty of any of these as much as a woman could. The fact is, we can all be better at dating. I really believe that the dating phase can be the most exciting, adventurous, interesting time you’ll ever have. I know some women who have so much fun dating that they don’t even want a relationship, simply because they enjoy putting energy and creativity into making great dates.

So what are some things you can do to create that feeling?

Dating needs to be something that excites us. Just going to the same old bar and having drinks makes it hard to inject much emotional connection. Try dates that force you to share an experience together – try new places, make that little extra effort to create an extraordinary experience. Do something you’re passionate about and bring him into your world.

b) Get to understand who he is, not just what he does

In first date conversation, spend less time on the facts and more time on understanding the person behind them. Share your dreams and aspirations. Talk about where you would most like to be in the world. Talk about your deepest values. Be excited about the future.

As we have already seen, most people treat first dates like a long test. Throw all that out the window and make the date about having fun together. People remember the emotions of a first date – the excitement and sense of adventure – let go and have fun – play silly games, go seek out a new area of your city you’ve never been before, tease each other and act like giddy teenagers – make your dates fascinating.

So there you have it, four things scaring him off and three steps for guarantee he comes calling for date two.

What are some of the best first-dates you’ve ever been on? I’d love to hear your comments.

Enjoy this post? Everything from meeting a guy to getting into a relationship is covered in my home study programme, The Man Myth. If you haven’t tried it out yet, click here to find out more and get access!

48 Responses to His Silence Explained: Four Reasons Why Guys Won’t Go For A Second Date

The Question You Should Avoid Asking On A First Date

I want to talk today about one of those recurring first-date questions: Should you be straight with a guy that you’re...